PROVO, Utah, Dec. 27, 2021 (Gephardt Daily) — Brigham Young University women’s basketball has moved up one spot to No. 18 in Monday’s Associated Press Top 25 after finishing the non-conference season with another win last week.

“BYU is ranked for the fifth week in a row, the program’s most consecutive weeks in the AP Top 25 since 2006 when the Cougars were in nine straight polls to end the year, finishing at No. 22,” said a news release from BYU.

BYU is coming off an 89-67 win over Montana State on the road to finish the non-conference schedule at 10-1 before West Coast Conference play begins this week. The road to 10-1 included wins over two ranked teams (No. 17 Florida State, No. 22 West Virginia) and three more Power 5 teams (Arizona State, Utah, Washington State).

This week, BYU hosts San Diego at the Marriott Center on Thursday, Dec. 30 at 7 p.m. The game will be broadcast on BYUtv. 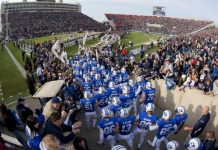