The worker in question, who is from Spanish Fork, was working in a trench when it collapsed on him, Nielsen said.

Other construction workers attempted lifesaving measures until emergency crews arrived and the man was transported by medical helicopter to Utah Valley Hospital in Provo. He subsequently passed away.

The man’s name has not been released pending notification of family members.

Nielsen said an investigation will be performed by the Occupational Safety and Health Administration, and Spanish Fork PD will also investigate the incident. 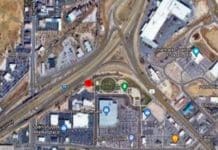