TAYLORSVILLE, Utah, May 14, 2019 (Gephardt Daily) — A convicted sex offender has been arrested after he was allegedly found in his truck with a 14-year-old girl in Taylorsville.

A probable cause statement from the Third District Court said Rudolfo Jesus Trevino, 31, was arrested Friday and is facing charges of:

The arresting officer wrote in the probable cause statement that he conducted a traffic stop on a Chevrolet pickup truck after he ran the license plate and found it did not have insurance on file.

“The vehicle was registered to a registered sex offender who is currently on probation for a felony sex offense,” the statement said. “As I approached the driver’s side, I observed that the driver, subsequently identified as the registered owner Rudolfo Trevino, was making furtive movements into the back seat of the truck.”

Trevino stated that he did not have any identification.

“A female was observed hiding under a blanket in the back seat area of the truck,” the statement said. “Due to the suspicious nature of the circumstances, the female and male were asked to step out of the vehicle. As I was walking Trevino to my vehicle for further questioning, I instructed him to stop at the front of my vehicle. Trevino continued walking away from me.”

After the officer placed “several distraction blows,” Trevino was taken into custody. He then gave a false name to the officer.

Trevino was found to be on probation for two felony sexual convictions against a juvenile under the age of 14. The same juvenile female, who is now 14, was found in his truck prior to his arrest on Friday, officials said.

The suspect has also been convicted for failure to register as a sexual offender, which he is required to do, providing false information to police officers and fleeing from law enforcement.

A subsequent inventory of Trevino’s vehicle revealed a folding knife, which he, as a probationer and convicted felon, is prohibited from possessing.

He was transported to the Salt Lake County Jail with his bail set at $28,510. 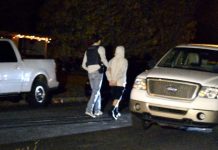