A follow-up tweet 30 minutes later said all occupants were out of structure and crews were still battling the blaze.

A third tweet at 12:45 p.m. said the fire is out and there are no reported injuries. 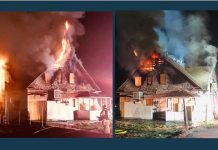