SALT LAKE CITY, Utah May 30, 2022 (Gephardt Daily) — Salt Lake City fire crews are on the scene of a two-alarm apartment fire which killed one person and injured four others early Monday morning.

The fire at the Silverado Apartments at 243 S. 300 E. in downtown Salt Lake City was first called into emergency dispatchers at 1:58 a.m. When firefighters arrived at 2:01 a.m., they found the front of the four story apartment building engulfed in flames.

“Tonight we received multiple calls there was an apartment on fire,” SLCFD Battalion Chief Dan Walker said. “We arrived to find fire coming mostly out of the first floor and burning up the front of the building.

“Our crews found that we had two individuals that had injuries sustained from the fire, as well as one fatality.

Two firefighters were also injured, according to Walker, one of whom suffered a laceration while the other was treated for overexertion.

The cause of the fire has yet to be determined, although neighbors told Gephardt Daily they heard a loud blast and felt their apartment shake before realizing a fire had broken out.

Walker said it was unclear, what, if anything, may have exploded. “There could be something in the building’s infrastructure, or they maybe had grills, or something on the patios,” Walker said.

Residents from 13 apartments were displaced in the fire. The Red Cross has been called to assist them in finding shelter.

“So at this time, we know that everyone’s out of the structure, except for our firefighters,” Walker said. “They’re working in there. And we have safety officers here on scene that are verifying that the areas they’re working in are safe. And they’re up right now just overhauling the fire to make sure that we don’t have any thing that still might come back to life in this building.” 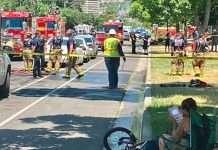