DUCHESNE COUNTY, Utah, Aug. 19, 2022  (Gephardt Daily) — The Duchesne County Sheriff’s Office has released information regarding several firearms that were stolen in May and the suspects in the case.

The suspect’s, according to the DCSO, are:

Anyone who may have received a firearm from one of the suspects or from someone associated with them is urged to let the sheriff’s office know. 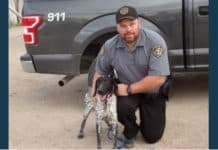