Genpak, at 2791 Highway 56, produces styrofoam plates for use in restaurants.

Employees evacuated through the front door of the building and, after a few moments of not being certain that everyone had made it out safely, the facility’s manager informed fire crews that everyone was accounted for.

“That was a relief and made our job easier,” Phillips said.

The major concern was that the area where the fire occurred contains highly flammable materials.

“If we had opened the door to the storage area, the additional oxygen would have caused the fire to spread through the whole structure,” Phillips said. “So we waited to get aerials (trucks) and pressurized the sprinkler system. The sprinkler system did its job.”

Phillips said the fire was contained and the building was saved.

“Everyone was happy with the outcome,” he said.

The cause of the fire is under investigation, and Phillips said a dollar estimate of damage is not yet available.

Highway 56 was closed for quite awhile, Phillips said, for crews to get the water supply across the road. Cedar City Police and Utah Highway Patrol assisted with the road closure and traffic control. 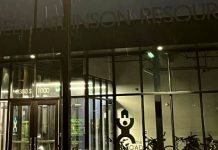