Unfired Fire Authority spokesman Patrick Costin told Gephardt Daily the call came in just before 10 p.m. of smoke and flames coming from from a mechanic’s shop.

Firefighters responded to the scene, at 3946 S. Main St., and found “heavy smoke and flames,” Costin said. “There was an initial report that someone possibly was trapped inside.”

Unified Fire, assisted by Murray Fire, South Salt Lake Fire and West Valley City Fire departments, blasted the fire with water. The blaze was knocked down in about 15 to 20 minutes, Costin said. Firefighters on scene numbered 30 to 35, he said.

“The person they thought was inside had escaped before fire crews arrived,” Costin said.

Officials “called for a second alarm due to the fire potential, with the oil and gas and potentially flammable things on the premises,” Costin said. “There were also some high-density residential apartments close, and firefighters were able to protect that building from exposure, so the fire didn’t jump to that building.”

Investigators were arriving just on the scene, Costin said at 11:30 p.m. Thursday. The cause of the fire is not yet known, and damage is estimated at about $200,000, he said. 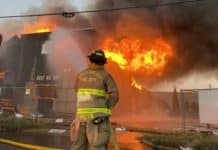