In a post Friday night on their Facebook page, Utah Fire Info, state fire officials noted the fire was now at 4,241 acres, down from previous estimates which out the size of the fire at some 4,600 acres earlier in the day. It also stated the Kane County Sheriff’s Office would be lifting evacuation orders Saturday for the nearby Bryce Woodlands Estates.

“At the recommendation of fire managers of the Left Fork Fire, the Kane County Sheriff will lift evacuations of the Bryce Woodlands Estates at 8 a.m. on June 25, 2022. The closure will remain in place and manned by a sheriff’s deputy until 8 a.m., at which time the roadblock will be removed and residents will be allowed back in. After that time, the road will move to a soft closure, and will not be blocked or manned by the sheriff’s office.

“This recommendation was made by the Incident Management Team based on current fire behavior and predicted weather.

“The fire received moisture over the last shift, and the reduced temperatures and higher humidity have allowed firefighters to make progress around the perimeter.”

Residents should be aware that the fire is still active, the statement advised, and they continue following the updates disseminated by the team to stay informed of the current situation. Residents are also encouraged to sign up for the Emergency Notification System for the county (https://member.everbridge.net/892807736721500/login).

“This will help with the current fire and future potential incidents in a community that is highly susceptible to wildland fire.” 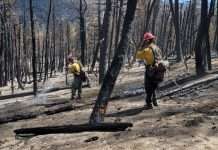 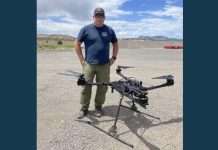