Utah County Attorney David Leavitt said at a Wednesday morning news conference that he will be considering seeking the death penalty in Hoover’s case, but will not make that decision until months down the line.

Hoover, originally taken into custody and transported to a local hospital to be treated for a bullet wound, is being held in the Utah County Jail without bail.

Details from the scene

On the day of Shinners’ fatal shooting, officers from the Orem and Provo Police departments learned that Hoover, a wanted fugitive, was parked in a strip mall parking lot at 20 W. University Parkway, Orem.

“He was homeless, staying at different locations, making it difficult to locate him,” said Orem Police Chief Gary Giles, who spoke at the news conference, as did Provo Police Chief Richard Ferguson.

Hoover was seated in a pickup truck with a female passenger when multiple uniformed officers called out to him, ordering him to surrender, the probable cause statement says.

“We attempted to block him in and take him into custody,” Giles said.

The probable cause statement picks up the story:

“Hoover willingly failed to comply with the commands given by officers. Officer Estrada made entry to the passenger side of the vehicle and attempted to physically control Hoover while continuing to give him commands to surrender.

“Hoover actively resisted Officer Estrada’s attempt to control him, put the vehicle in reverse, and backed into a police vehicle. Hoover then put the vehicle in drive, drove forward sideswiping a storefront, then drove the vehicle westbound through a parking lot before coming to a stop.”

“When the vehicle came to a stop, Officer Joseph Shinners entered the passenger side of the vehicle with Officer Estrada to aid in the apprehension of Hoover,” the statement says.

“While in the act of resisting arrest, Hoover produced a Ruger .380 semi-automatic pistol. Hoover fired the pistol striking Officer Shinners in the left side of his body.”

Shinners was rushed to a nearby hospital for treatment by two of his fellow officers. Other officers remained at the scene, stabilizing Hoover before transport to the same hospital.

“He (Hoover) was cared for in the room next to Officer Joe Shinners,” Leavitt said.

“If you can imagine the scene of Provo and Orem police officers lining the hallway, their willingness to be respectful to the process as the defendant was being cared for in the very next room,” he said, praising the officers’ professionalism. “I salute them.”

Shinners succumbed to his injuries. Hoover survived, and remained hospitalized until last week, when he was booked into the Utah County Jail on warrant charges. Leavitt said the reason he waited to file charges was that Hoover was in custody already, and Leavitt wanted the charging documents to be perfect.

The purple Ruger .380 semi-automatic pistol located in Hoover’s possession was found to be stolen. A police search of Hoover’s vehicle also turned up a syringe containing a brown/red liquid and a plastic bag containing a crystal-like substance. Both tested positive as heroin.

Multiple glass pipes consistent with methamphetamine use were also located in the vehicle. A plastic bag with a substance that tested positive as meth was found in Hoover’s pocket.

At the hospital, Hoover’s urine tested positive for amphetamines, benzodiazepines, and opiates.

The probable cause statement says police interviewed a person identified as a close friend of Hoover, who stated Hoover often said he would not go back to prison, and instead would “shoot it out” with police.

“Hoover made the comment that the next time he was pulled over by police, he was going to shoot to kill and hoped he was killed.”

The friend also said Hoover always carried a .380 pistol he referred to as the “Purple People Eater,” and the “Purple Monster.”

In an interview following a November 2018 police pursuit of Hoover, his ex-wife was contacted by police, the statement says.

Hoover’s ex-wife informed police Hoover had made statements to her indicating he would rather commit “suicide by cop” than go back to prison.

In a brief show of emotion, Giles said he was pleased that Hoover’s plan did not work out.

“It gives me some satisfaction that while he did survive his injuries, he won’t get his first choice (of suicide by cop). He will have to suffer through jail and prison.”

Shinners was buried on Jan. 12 with full police honors. He left behind a wife and 1-year-old son.

Leavitt asked that the media not add to Hoover’s notoriety, and urged reporters to refer to the case not with Hoover’s name, but as “The Joe Shinners murder case” when possible.

He also said that in honor of Shinners, his office would number cases of fallen officers not with regular case numbers, but with the prefix FO, then the officer’s badge number. Shinners’ case number, he said, is FO-3310.

Giles and Ferguson spoke briefly on initial plans to help officers process their grief and cope with stress at the loss of Shinners.

Leavitt also asked his listeners to keep those Sinners left behind in their thoughts, especially “a 26-year-old widow and a young child for whom life will never be the same.”

He asked that members of the public let “KayLyn Shinners and her son be subject of your thoughts and prayers, as this is only beginning for her…. Be mindful of the Shinners family as you go about your life.”

To see Shinners’ vigil and tributes, view the Provo Police Department video below. 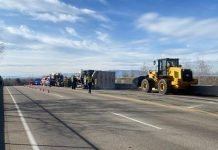