“It was in a detached garage behind the residence, and it was noticed by a neighbor,” Captain Anthony Burton, SLCFD, told Gephardt Daily. “The neighbor notified the family in the home, and they were able to evacuate. That individual even tried to extinguish it with a portable fire extinguisher, but it was too big.”

“Substantial damage” was done to the garage and to two vehicles parked inside, Burton said.

“We searched to make sure there was nobody inside, and there wasn’t,” he said. “The nice part of was the community support and understanding. We had vehicles and equipment blocking the street, and it kept them from getting out of their houses, but everyone was cooperative.”

About 25 to 30 firefighters responded, Burton said, some of them traveling from the site of a two-alarm westside fire reported about an hour earlier.

“It had us rushing from one side of town to the other,” Burton said, adding there were no injuries in either fire. 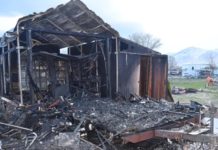 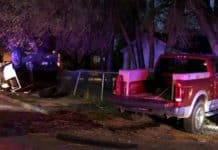