On Friday, Sept. 17, Laundrie’s parents, Chris and Roberta Laundrie, told the FBI that their son went to the Carlton Reserve that Tuesday, Sept. 14, but never returned home. They later said that in fact, they last saw their son Sept. 13.

Since then, the North Port Police Department and the FBI have been searching the 24,565-acre nature reserve for the 23-year-old man.

A statement from the Pasco County Sheriff’s Office Thursday says: “We have two K-9 units assisting North Port PD/Sarasota Sheriff’s Office/FBI; one human remains detection K-9 and one K-9 trainer. It’s important to note that the K-9 trainer drives a vehicle that says ‘Arson Investigation’ on it, but they have not requested our arson K-9 or investigators. This trainer simply helps train our HRD K-9s and is acting essentially as a ‘spotter’ for the working K-9’s safety. The HRD K-9 assisting is handled by one of our forensic investigators, so you may see a PSO Forensics vehicle as well. This is not the first time we have been requested.”

Laundrie is the only person of interest in the murder case of 22-year-old Gabby Petito. The couple, who shared a home with Laundrie’s parents in Florida, had been traveling across the western U.S., including stops in Utah, before Petito’s disappearance near the end of August.

“We find the cause of matter the cause of death by strangulation, and manner is homicide,” Blue said at a news conference.

Laundrie returned home on Sept. 1, driving Petito’s van, but without her. Petito was reported missing on Sept. 11.

Laundrie declined to cooperate with authorities, as did his parents.

On Sept. 19, FBI agents found the remains believed to be Petito’s in an area where the couple had been camping in Grand Teton National Park.

Officials confirmed on Sept. 21 the human remains found in Grand Teton National Park were those of the missing woman, and her manner of death was homicide.

Though authorities have not explicitly connected Laundrie to Petito’s death, they’ve been looking for him, in part over a federal arrest warrant accusing him of illegally using another person’s debit card. That card belonged to Petito, investigators say.

Searchers in Florida said last Wednesday, Oct. 6, they found the remnants of a campsite that appeared to have been recently used at the reserve, which has hiking paths and areas of swamp. They have yet to find any evidence linking the site to Laundrie.

If anyone with information in this case is asked to call 1-800-CALL-FBI. 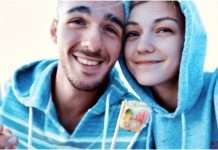