SALT LAKE CITY – November 14, 2015 (Gephardt Daily) ─ Within sight of the Salt Lake Temple, more than 2,000 alienated members of the Church of Jesus Christ of Latter-day Saints and their supporters gathered Saturday for the LDS Church Mass Resignation Rally.

“Someone was trying to count, but lost track,” said Lauren Elise McNamara, one of the event’s coordinators. “I am shocked by the number of people who came out, and pleased at the amount of love and support from members and non-members here today.”

The event was sparked by policies detailed in an LDS handbook intended for use by church bishops and other officials. The policies, revealed last week, labeled same-sex marriages and relationships as acts of apostasy, and declared that the children in a home with two gay parents would not be allowed to participate in church rites, including baptism, until they reached the age of 18 and renounced their parents’ homosexual relationship.

“I’m planning on resigning today,” said Eliasha McKenzie, 13, of Salt Lake City. “It’s not cool that they’re not letting children of gay parents be members. My mom and her girlfriend are gay. Their choice is getting excommunicating or resigning. I’m also here to support my friends who are LGBT. This world deserves peace, not hate.”

Even before the 1 p.m. event at City Creek Park began, long lines had formed at tables where volunteers were available to answer questions or help with paperwork. Attorney Mark Naugle was at the head of another line, offering his services for free to people who wanted to resign from the church efficiently and without revealing their home address on the form. Naugle offered the address of his law office instead.

Naugle, contacted a few hours after the event, estimated he had received 1,500 resignations from attendees who wanted his help.

“I’ve wanted to resign for a while,” said Sariah Westfall, 36, of Salt Lake City. “I have not been active in 18 years, and I don’t believe anymore. I don’t like that they exclude the children of gay parents. It will rip families apart. It’s supposed to be a family-oriented church, but it’s ripping families apart.”

“I was excommunicated, but I have family that is still Mormon, and the church’s policies hurt these families who want to be Christ-like and love everyone,” said Walker, who was delivering resignations for five family members active in the faith. “The church institutionalizes homophobia.”

Zilpha Larsen, 38 and from Millcreek, said she was coming to support people who had decided to resign. Larsen resigned from the LDS Church in 2012, at the first mass resignation, which she organized.

“I realized the church had not always been truthful when I was growing up,” she said. “My best friend in high school was gay. I didn’t find out until after his mission. He was a good person. The church says homosexuals are bad. It doesn’t accept homosexuals, and there’s no good reason for it. To me, if the Mormons’ God doesn’t accept homosexuals, that God is a false God, and anything they say is a revelation that is from a false God doesn’t matter to me.”

Jessica Wunschel, 62 and visiting from Washington state, said she empathized with the group, but wasn’t at the event to resign.

“I want to be excommunicated,” said Wunschel, who had decorated herself with a feather boa and forehead “gems” in rainbow colors. “Resigning is going away quietly. To me, the seat of their power is excommunication. To them, it’s a weapon. I want to make a mockery of it.”

Wunschel said she was in an abusive marriage, and one night her husband nearly strangled her, refusing to let her breathe until she promised to read scriptures demanding wifely obedience.

Event speakers began after a moment of silence to honor victims of Friday’s terrorist attacks in Paris. Then speaker Brooke Swallow talked about the need for dialogue and compassion. Quoting Martin Luther King, Jr., she said, “Hate cannot drive out hate, only love can do that.”

Speaker Heather Palmer talked about the policy that would prevent her son and her stepdaughter from being baptized.

“This will have a huge impact on my family,” Palmer said.

And before the group adjourned briefly, so the hundreds whose paperwork was complete could walk to a nearby mailbox and deposit their letters, speaker Don Braegger shared a story that dated back 25 years.

“I was on the stake high council, and was made aware of a returned missionary who was gay and not sure how he could fit into the church,” Braegger said. “I wanted to write an anonymous letter telling him I shared the same feelings, but I hesitated to mail it.

“Within a month, I learned he had hung himself in his parents’ home with a belt. The church he had given two years of his life to had no place for him.

“Back then, I was the married father of three,” Braegger said. “Now I am the father of seven, and I came out nine months ago…Never underestimate the power of people to save the world. It’s the only way that it changes.” 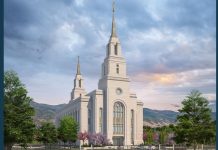 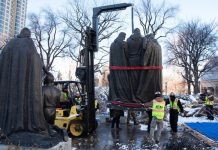