SALT LAKE CITY, Utah, Dec. 22, 2015 (Gephardt Daily) — Police have a hit-and-run suspect in custody after he was found by K9 T-Bone hiding under a porch.

Salt Lake City Police Department said witnesses stated the driver exited the car and fled on foot. Officers and a K9 unit converged on the area, and tracker/sniffer dog T-Bone located the driver nearby, hiding under a porch.

Police said Jesse Reeley, 27, was booked for hit-and-run and other charges. The car he had been driving turned out to be stolen. 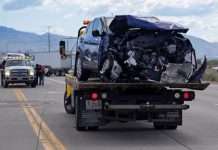