CARBON COUNTY, Utah, Feb. 17, 2020 (Gephardt Daily) — A man was arrested in Carbon County after he allegedly ran over and killed a dog that took a chicken from his backyard.

A probable cause statement from the 7th District Court of Carbon County said Lonnie Carl Campbell, 63, is facing a charge of aggravated cruelty to animals intentional or knowingly, a class A misdemeanor.

On Monday at 6:15 a.m., the arresting officer was dispatched to the area of 400 E. 400 South in Price, in reference to a dog that had been run over and killed.

“Upon arrival, the victim advised he was walking with his Alaskan Malamute dog along the railroad tracks,” the statement said. “The victim had his dog on a leash. The dog pulled away from the victim and entered the backyard of a residence. The victim wasn’t able to maintain his hold on the dog’s leash due to the dog’s instinct to run after the chickens located in the backyard.”

The victim said he wasn’t able to catch back up to his dog and said Campbell got into his truck and chased his dog down until he ran over it and killed it.

“Lonnie Campbell said he was in his workshop when the dog entered onto his property,” the statement said. “Lonnie said he observed the dog chasing his chickens in the back yard, then take a chicken and leave the property. Lonnie said he became angry, so he got into his truck and started chasing the dog. Lonnie said he intended to catch up to the dog and hit it in the head. Lonnie said he wanted to hurt the dog.”

The suspect said he was able to catch up to the dog and run his vehicle over it.

“After Lonnie ran the dog over he stopped his vehicle and turned around to go back home,” the statement said. “Lonnie said he knew he probably killed the dog. Lonnie also explained that he lost his temper and shouldn’t have. Lonnie considers his chicken as a pet.”

The dog was found dead approximately half to three-quarters of a mile west of Campbell’s residence.

The statement added the victim told officers he paid $650 for his dog, Kain.

Campbell’s chicken was found just outside his property and was not injured.

Campbell was taken into custody and transported to the Carbon County Jail for booking. He was later ordered to be released with the condition of a mandatory court appearance. 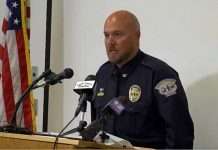