MURRAY, Utah, Oct. 22, 2020 (Gephardt Daily) — The Murray Police Department says the suspect in an aggravated assault case that left a woman severely burned has been arrested.

According to a police statement, 44-year-old Andrew Todd Curtis was taken custody Thursday. No other information was immediately available.

“A 34-year-old female was burned over 70% of her body when the suspect poured an unknown accelerant on her and lit it on fire,” police said. “The victim and suspect in this case are known to each other.”

Witnesses told investigators the couple had been arguing throughout the day.

First responders were initially called to the scene of a structure fire before making the grim discovery. 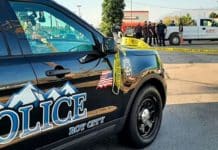