According to Unified Police Lieutenant Paul Barker, it all started with a traffic stop at 300 East 3900 South in Millcreek.

He told Gephardt Daily that a woman was behind the wheel, and for some reason, the male passenger told her drive off but she refused.

“He pushed her out of the way and jumped in the driver’s seat and took off,” says Lt. Barker.

He also says the officers on the scene noticed the commotion and one was able to jump out of way of the oncoming car in the nick of time.

“Luckily, the car just brushed his leg,” said Lt. Barker. “But he saw enough of it coming that he was not injured.”

UPD says the driver proceeded to lead officers from multiple agencies on a chase winding through South Salt Lake and into Salt Lake City, where he found himself boxed in at 133 Mead Ave. (approximately 1000 South).

Lt. Barker says the driver hit one police cruiser head-on before backing into another police car.

In all, 3 police cars and the chase suspect’s vehicle suffered damage, but no officers, civilians or suspects were hurt.

The driver was arrested and booked into jail. 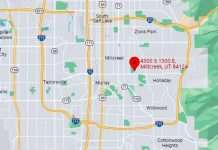 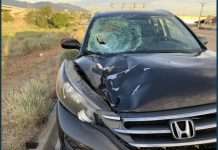