WASHINGTON COUNTY, Utah, Oct. 7, 2021 (Gephardt Daily) — A suspect is in critical condition after apparently shooting himself after a pursuit through Washington County Wednesday.

The suspect has been identified as Shannon Alan Griffin, 55, of Rockville, said a news release from Washington County Sheriff’s Office Thursday afternoon.

“Members of the Washington County Critical Incident Task Force continue to investigate the Oct. 6 officer-involved shooting incident,” the news release said.  “After processing initial evidence and statements, it is our intent to provide the public with accurate information regarding the events as evidence has shown to this point.”

Officers from the Hurricane Police Department were dispatched Wednesday afternoon to a report of a suspect who had brandished a weapon toward a man and his daughter on State Street, the news release said. Witnesses reported the vehicle left the area and had stopped at a nearby business.

Officers then pursued Griffin as he traveled east on State Route 9 toward Zion National Park. Officers pursuing Griffin reported he was firing gunshots at vehicles as he passed through the cities of Hurricane, LaVerkin and Virgin. Pursuing officers reported that at times during the pursuit, Griffin reached speeds in excess of 100 mph and drove into oncoming traffic.

Investigators said 10 vehicles were shot at during the incident.

“Despite the potentially catastrophic damage which could have occurred, only minimal injuries have been reported from citizens,” the news release said. “No officers were injured in the incident.”

Officers from the Springdale-Zion Canyon Police Department positioned tire deflation devices and officers equipped with lethal force at approximately milepost 25 on SR-9. As Griffin drove through the location at least one tire was punctured and an officer discharged his weapon toward the suspect.

Officers continued to pursue Griffin into the town of Rockville where he stopped his vehicle in the roadway. As he exited the vehicle, he exchanged gunfire with two Hurricane police officers prior to fleeing on foot into the adjacent residential area.

“At that time, a reverse 911 call was sent to the area alerting citizens of the armed fugitive in the area,” the news release said. “They were asked to shelter in place. Federal, state and local agencies responded to the area with SWAT assistance to search for Griffin. Authorities also used a helicopter and drones to canvas the area for a possible location.”

Shortly after officers and SWAT members began searching the area, a single gunshot was reportedly fired by an individual other than law enforcement.

At approximately 6:15 p.m., officers located Griffin in the backyard of a residence.

“Griffin had sustained a head injury from what appears to be a self-inflicted gunshot wound,” the news release said. “An ambulance was immediately requested to respond to the location, and subsequently transported Griffin to St. George Regional Hospital where he is currently listed in critical condition.”

As part of standard protocol, one officer from Springdale-Zion Canyon Police and two officers from Hurricane Police Department have been placed on paid administrative leave pending the legal determination of their actions related to the use of lethal force in the incident.

Investigators are asking any potential victims who have yet to speak with police, to contact WCSO dispatch at 435-634-5730. 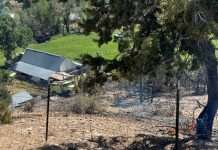 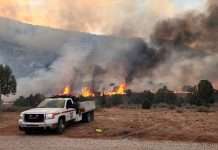