OGDEN, Utah, July 28, 2022 (Gephardt Daily) — Ogden City firefighters responded to a fire in a metal building behind a residence Thursday.

“Fire units arrived on the scene to a single-story metal shop with smoke coming from the roof of structure. The structure was quickly searched, and nobody was inside.

“Firefighters worked to extinguish the fire and had the fire under control
and extinguished in a short time frame.”

“It appears there was equipment or something inside the building that caught fire,” Ogden City Fire Deputy Chief Mike Slater told Gephardt Daily. “It was a metal building, and we were able to keep it contained to the building and got the fire out relatively quickly.”

The Fire Marshal’s office is on the scene investigating the cause of the fire, the building is being secured and has an estimated $100,000 in damage, the OFD statement says, adding, “Nobody was displaced or injured during the incident.” 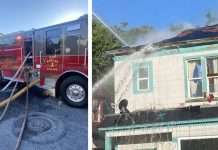 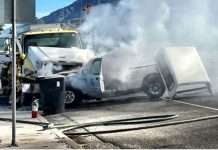