OGDEN, Utah, Nov. 29, 2020 (Gephardt Daily) — An Ogden man has been arrested after an altercation in a tire shop that led to a shot being fired.

A probable cause statement from the 2nd District Court of Weber County said Carlos Edmundo Reyes, 39, is facing charges of:

On Wednesday just after 2:30 p.m., officers with the Ogden City Police Department received reports of shots fired at a tire shop, the statement said. The complainant reported that a man got into an argument with two people before drawing a firearm and firing one shot in their direction. The two were able to run away and were not struck by the suspect’s gunfire.

The male fled on foot and was seen entering a trailer park nearby, the statement said. Officers from Ogden City Police Department, with the assistance of several other agencies, set up a perimeter and began searching for the suspect.

Video footage was obtained from the tire shop, and the suspect was identified as Reyes. It was discovered that Reyes lived in the trailer park that officers were actively searching. Contact was made with the suspect at his trailer and he was taken into custody without incident.

“Several store employees watched the altercation and shooting occur and were able to describe the two victims and the suspect in great detail,” the statement said. “At this time, the two individuals who were shot at were never located or identified. It appears that after being shot at they continued to run and never returned.”

Officers obtained a warrant to search Reyes’ trailer. In Reyes’ room officers located a spent .380 caliber shell casing, the same caliber as the shell casing found on scene. Officers are still attempting to locate the firearm that Reyes allegedly used to commit the crime. 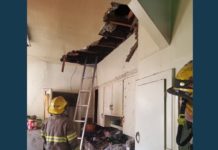