OREM, Utah, Aug. 26, 2022 (Gephardt Daily) — Police say an Orem business owner found a box of explosives in a trailer on their property Friday, one day after the employee who lived there was arrested for joyriding in a company vehicle.

Police were called to a business near 750 N. State, where the owner went to clean out a trailer on the property and found a box containing what appeared to be explosives, according to a post on the Orem Police Department’s Facebook page.

“Officers were called and found the box containing suspected explosives. The Utah County Bomb Squad was called out and a warrant for the trailer was written,” the post states.

Scott Bowers, 46, lived in the trailer on the business owner’s property prior to his arrest Thursday for taking a company vehicle without permission. Bowers also was found with narcotics and paraphernalia at the time of his arrest.

Bowers was booked into the Utah County Jail for investigation of joyriding and drug-related charges. Potential charges for possession of an explosive device and possession of a dangerous weapon by a restricted person were added Friday.

Police have requested that Bowers be held without bail due to the nature of the bomb-making materials discovered.

The FBI also has been contacted and will be involved in the investigation, police said. 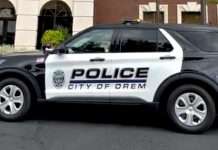