TAYLORSVILLE, Utah, Sept. 13, 2022 (Gephardt Daily) — Police say one person is in stable condition after being shot in the face during a possible road-rage incident Tuesday in Taylorsville.

Taylorsville police responded about 4:50 p.m. to reports of an assault with a weapon near 3100 West and 6200 South.

“As we arrived, we located one individual with a single gunshot wound to the face in the lower jaw area,” Taylorsville Police Sgt. Kresdon Bennett told Gephardt Daily.

Bennett said the victim was transported by ambulance to an area hospital in stable condition. The victim had been “talking and cooperating with officers” following the shooting, he said.

Bennett said the shooting remains under investigation, but preliminary information suggests it started as a road-rage incident.

“We’re still working to ascertain what started it and how it escalated (to a shooting),” he said.

Both individuals involved in the shooting were cooperating with officers, Bennett said.

No other information about the victim was released Tuesday. 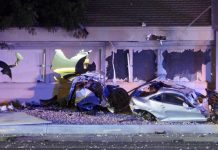