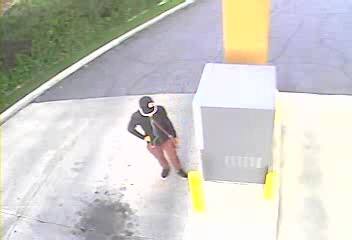 OREM, UTAH – May 19, 2015 (Gephardt Daily) – Police discovered that a skimming device had been placed on an ATM at a bank in Orem on May 11. They are not revealing which bank it was but they confirm customers that may have been affected have been contacted.

The device was placed over the card reader so when the card was slid into the ATM it actually passed through the skimming device and recorded the card information. There was also a camera placed on the ATM, this was used to record the users PIN information.

Police have released surveillance footage of the suspect and need the public’s help in identifying him. If you know the man in the photos you are asked to call the Orem Police Department at (801) 229-7070.

Police believe that this man is part of a bigger ring of thieves, and  are working in conjunction with the FBI Cyber Task Force to put a stop to them.

Here are some tips from NetSecurity.About.com to avoid skimmers.

1. Inspect the card reader and the area near the PIN pad

Many banks and merchants realize that skimming is on the rise and will often post a picture of what the real device is supposed to look like so you will see that there is something attached that is not supposed to be there if a skimmer is present.

If you think the scanning device doesn’t look like it matches the machine’s color and style, it might be a skimmer.

2. Look at other nearby gas pumps or ATMs card readers to see if they match the one you are using.

Unless skimmers are running a large operation, they probably are only skimming at one gas pump at a time at the station you are using. Look at the pump next to yours to see if the card reader and setup look different. If they do then you might have just spotted a skimmer.

3. Trust your instincts. If in doubt, use another machine somewhere else.

Our brains are excellent at recognizing things that seem out of place. If you get a sense that something looks off about the ATM you are about to use, you might be better off using one that you feel more comfortable with.

4. Avoid using your PIN number at the gas pump.

When you pay at the pump with your debit/credit card, you usually have the option to use it as a credit or a debit card. It’s best to choose the credit option that allows you to avoid entering your PIN in sight of a Card Skimmer camera. Even if there is not a card skimmer camera in sight someone could be watching you enter your PIN and could subsequently mug you and take your card to the nearest ATM to withdraw some cash.

When you use it as a credit card you usually only have to enter your billing ZIP code as verification which is much safer than putting in your PIN.

5. Keep an eye on your accounts

If you suspect that you might have had your card skimmed, keep an eye on your account balance and report any suspicious activity immediately.