HOOPER, Utah, Sept. 5, 2022, (Gephardt Daily) — Residents lured to a remote location for a vehicle sale were greeted by two armed men in masks who robbed them.

According to a Davis County Sheriff’s Office press release posted Monday, instead of finding a prospective buyer, “When they arrived, two Caucasian males wearing white masks and driving a red 4-door sedan held the victims at gunpoint.”

They took the victims’ cash in the Sunday night hold-up in Hooper, the sheriff said, but did not steal their vehicle.

“Currently, both suspects are at large. We’re asking anyone with information to come forward and call Davis Dispatch at 801-451-4150.”

One suspect is described as in his mid-30s, with short brown hair and facial hair, wearing a white mask, blue shirt and blue jeans.

The second suspect is a male in his late 20s with short brown hair also wearing a white mask, a rainbow tie-dye shirt, beige jogger-style pants and sandals.

“When buying or selling any item to a stranger, insist on meeting at a public location in the middle of the day,” the sheriff advises.

“Many law enforcement agencies have dedicated areas equipped with safe trade stations that have video surveillance.” 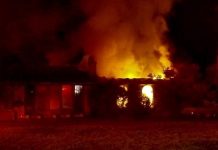