PLEASANT VIEW, Utah, Dec. 23, 2020 (Gephardt Daily) — A 19-year-old man was booked into the Weber County Jail on Tuesday after officials say he punched or kicked two Pleasant View Police officers in the face, and attempted to kick a third in the groin.

Officers arrived at a Pleasant View trailer home after a call reporting that Birkholz, who lives there, was yelling and breaking things inside the residence, a probable cause statement says.

When officers arrived, Birkholz came out of his bedroom, then tried to re-enter despite commands not to. He also refused to show his hands, the statement says.

“Birkholz still tried entering his room and Sgt. Talbot grabbed a hold of his arm,” the reporting officer wrote. “At this time, I witnessed Birkholz pull away with his left arm and then strike Sgt. Talbot in the face with his right fist.

“At this time he and Talbot began struggling, but due to the small hallway of the trailer home, myself and Officer Kortright were unable to help Sgt. Talbot. Talbot then was able to take Birkholz to the ground and I was by Birkholz’s head. He was given several verbal orders to stop resisting but he continued to fight.

“While I was attempting to help, Birkholz’s legs came out from under Sgt. Talbot, and I was kicked in the face by Birkholz left foot. I was also informed by Officer Kortright that Birkholz was also trying to strike him in the groin.”

An officer spoke with the female victim, who said the front door had been broken in, and Birkholz had tried to take the phone from her so she could not call police for help.

The police statement also notes that during the struggle, Officer Kortright’s bodycam was broken.

Birkholz was booked into the Weber County Jail with bail set at $31,410. As of Wednesday evening, he remained in jail. 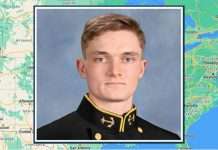