PROVO, Utah, June 29, 2017 (Gephardt Daily) — The public is being warned to stay out of Utah Lake’s Provo Bay because of the discovery of a blue-green algal bloom. Pets also should be kept out of the water.

The Utah Department of Environmental Quality issued the warning after samples of the water were found to contain algae that have the potential to produce toxins.

In a news release from the DEQ, Ralph Clegg, executive director of Utah County Health Department, said, “There are many areas of the lake not currently affected. We want people to safely enjoy Utah Lake but also want to caution visitors about the presence of potential harmful algal blooms in certain parts of the lake that may pose a health threat.

According to the news release, the bloom was first spotted via satellite imagery, just “a few weeks before the one-year anniversary of the massive algal bloom that shut down Utah Lake last year.”

Crews are continuing to collect samples around the lake. Currently, signs have been posted at Utah State Park near Provo Bay to warn people against recreating in the bay.

As the algae proliferates, the blooms consist of cyanobacteria, which poses risks to humans, wildlife, domestic animals and fish.

Symptoms of exposure include headache,  fever,  diarrhea,  abdominal pain, nausea and vomiting, and in some cases, a reaction similar to an allergic reaction from skin contact.

Anyone who is concerned about possible human exposure should call their doctor or the Utah Poison Control Center at 800-222-1222. 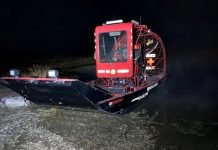 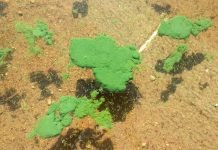 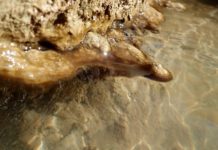