Oct. 18 (UPI) — The U.S. Securities and Exchange Commission charged the British-Australian mining firm, Rio Tinto, and two of its former top executives, arguing they inflated the value of their coal assets.

The commission filed the charges against the company in a Manhattan federal court on Tuesday, claiming Rio Tinto and its former CEO Thomas Albanese and former CFO Guy Elliot failed to follow proper accounting standards and company policies to correctly value its assets.

“As alleged in our complaint, Rio Tinto’s top executives allegedly breached their disclosure obligations and corporate duties by hiding from their board, auditor, and investors the crucial fact that a multi-billion dollar transaction was a failure,” Stephanie Avakian, co-director of the commission’s enforcement division, said in a news release announcing the charges.

The firm allegedly sought to hide or delay disclosing the nature of the declining value of their coal assets from Rio Tinto’s board of directors, audit committee, independent auditors and investors.

The commission’s complaint accuses the former CEO and CFO of allowing Rio Tinto to release misleading financial statements, adding that the fraud began in 2011 and ended in January 2013 — when a Rio Tinto executive discovered that coal assets were being carried at an inflated value on the company’s financial statements

“Rio Tinto and its top executives allegedly failed to come clean about an unsuccessful deal that was made under their watch,” Steven Paikin, co-director of the the commission’s enforcement division, said in a statement.

“They tried to save their own careers at the expense of investors by hiding the truth,” Paikin said.

The mining company said in a news release it will “vigorously defend” the charges, adding that the SEC’s case against Rio Tinto is, “unwarranted and that, when all the facts are considered by the court, or if necessary by a jury, the SEC’s claims will be rejected.” 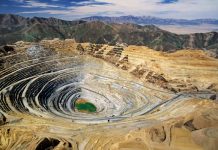