Lt. Dave Cracroft, of the Salt Lake City Police Department, said the incident began at about 10:30 p.m. when an officer heard the shots, apparently coming from a residence at 700 N. Starcrest Dr.

Officers from the SLCPD established a containment area, and contacted the people inside the house. The people emerged from the residence and cooperated with officers, Cracroft said.

Police officers and a K-9 unit were sent in to search for anyone who might be injured or hiding, but the house was cleared.

Shell casings of unknown caliber were found on the front porch, but no damage or injuries were found. SLCPD officers suspect a gun may have been fired into the air, and they believe strongly that the shooter is among those who emerged from the house, Cracroft said. 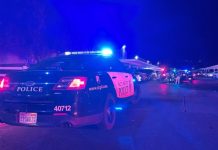