The report of the fire, at 5281 W Harold Gatty Drive, came in shortly after 10 p.m., when the sprinkler system within the building was set off by the heat.

SLC Fire Capt. Adam Archuleta told Gephardt Daily that smoke was coming from the exterior roll-up doors when the first crews arrived, so a full alarm was activated.

Firefighters used forklifts to move bales of paper away from the ones that were burning.

Archuleta said the sprinkler system was helpful, and crews had the fire suppressed within about 20 minutes.

Overhaul and smoke removal will take quite a while longer, Archuleta said, because of the large size of the building.

“Fortunately, no one was in the building at the time of the fire, and there were no injuries,” he said. 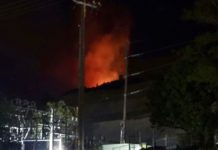 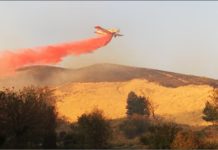