SANDY, UTAH – September 18, 2015 (Gephardt Daily) – Sandy City Police detectives have arrested a second man in connection with a home invasion robbery that occurred while a teen was home alone.

According to Sandy City Police Sgt. Dean Carriger, Heath Miller, 26, was taken into custody by detectives on Thursday and booked into the Salt Lake County Detention Center on suspicion of burglary and theft.

Officials said a 15-year-old girl was home alone Wednesday around 2:15 p.m., near 500 East and 10735 South, when she heard what she thought was glass breaking. “She called her mom, who in turn called police,” said Sgt. Dean Carriger, Sandy City Police. “When our officers responded, they discovered two individuals inside the home and called for back-up.”

Police officers reassured the girl she was safe while other officers attempted to stop the suspects’ vehicle. “The suspect ended up fleeing from officers onto 700 East and as he approached 9000 South he came against a red light,” Carriger said. “He ran the red light and struck a white Chevy Tahoe, causing it to roll.”

After the collision, the suspect, later identified at Niklus Beauchaine, 36, ran on foot but was apprehended a couple of blocks from the scene.

Carriger said that somewhere before the chase started, Miller got out of the car and ran, but detectives were able to identify him later during their investigation.

The victims in the Tahoe received minor injuries and were transported to an area hospital.

The investigation is still ongoing, and the case has been turned over to the District Attorney’s officer for screening.

Carriger said this 15-year-old girl did everything right by calling for help when she heard something suspicious. “She was able to get help to her and that was a very important thing to do,” Carriger said. 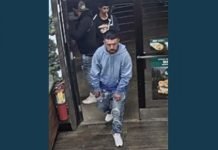