SALT LAKE CITY, Utah, Oct. 17, 2021 (Gephardt Daily) — A Salt Lake City man has been jailed after police say he used a hatchet and wheelchair to break into an apartment in his complex, then swung the weapon at the tenant and a woman, threatening to kill them.

“The AP (accused person) was contacted after he reportedly attempted to use a hatchet on an apartment door, in an attempt to gain entry,” says the probable cause statement filed by an officer of the Salt Lake City Police Department. “Multiple hatchet strikes were later observed and photographed.”

When the tenant opened the door to see what the noise was, “the AP used his reported 400 pound, battery-powered wheelchair as a bulldozer to force the door open and to push his way into the apartment.”

“This all occurred while the AP was swinging a hatchet at the resident” and the woman, while reportedly stating, ‘I’ll kill you.'”

One victim was injured while trying to get the hatchet away from Munguia, the statement says.

This altercation was witnessed by a third party who wrote a signed statement detailing the events, saying apartment drywall was damaged “caused by the bulldozing wheelchair,” they said.

“Also located in the apartment was the rubber joystick cover to the battery powered wheelchair belonging to the AP. The altercation only stopped when the AP was disarmed, subdued, and the joystick was used” by a victim to “reverse the wheelchair out of the apartment.”

Post Miranda, Munguia reportedly told police he had gone to the apartment to collect a debt, and “brought the hatchet because it was a family heirloom that belong to her and he wanted to show it to her,” referring to one of the victims.

“The AP had no answer for the chop marks on the door or how or why he was inside the apartment. The AP made several statements that he messed up and that this was all his fault.”

Munguia is being held without bail in the Salt Lake County Jail. 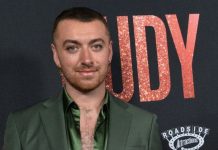