SPANISH FORK, Utah, April 28, 2020 (Gephardt Daily) — The woman whose vehicle was struck by a semi Monday afternoon as she attempted to turn left onto U.S. Highway 6 at Powerhouse Road has succumbed to her injuries.

She has been identified as 22-year-old Joy Johnson, of Spanish Fork.

Johnson suffered severe head trauma and was flown by medical helicopter to Utah Valley Hospital. Her condition at the time was listed as “extremely critical.”

The crash occurred at about 4:43 p.m. as Johnson, who was driving north, attempted to turn left onto westbound U.S. 6, Lt. Brandon Anderson, with the Spanish Fork Police Department, said Monday.

A semitruck heading east on U.S. 6 struck the woman’s SUV on the driver’s side.

The driver of the semi was not injured.

On Monday, Lt. Anderson said witnesses reported that the SUV had stopped at a stop sign before pulling out to make the turn onto U.S. 6, and Johnson may not have seen the semi or didn’t realize it had the right of way. 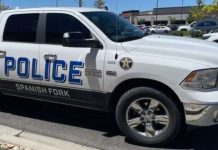