SPRINGVILLE, Utah, May 21, 2022 (Gephardt Daily) — For the second time in a week a fatal shooting incident has rocked the town of Springville.

Roughly three hours later a 25-year-old male walked into the police department saying he had information about the shooting and was arrested, he said, as the suspect in the homicide.

“The detectives are still talking to him, so I can’t say if he has confessed,” Foster told Gephardt Daily. “He will be booked into the Utah County Jail.” The two men were not blood relatives, he said, but they knew each other. A motive is yet to be determined.

Witnesses reported 3-5 shots fired, Foster said, and the victim suffered at least one gunshot wound to the chest and at least one to the head.

Ring camera video shows the 25-year-old’s vehicle fleeing the scene shortly after the shooting with him as the sole occupant. “Those things are so valuable,” he said of video systems connected to doorbells.

Foster said in his 28 years with the Springville force, there have never been two homicides four days apart, noting the city of 36,000 does not even average a homicide a year. 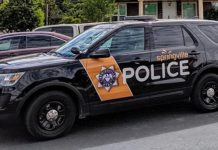