ST. GEORGE, Utah, March 30, 2019 (Gephardt Daily) — A man was booked into the Washington County jail after police say he left a liquor store, struck and injured a pedestrian, and left the accident scene.

The victim was transported to the Dixie Regional Medical Center “for the serious bodily injury he sustained during the accident,” says a probable cause statement filed by an officer of the St. George Police Department.

The suspect, Trever Andreasen Royce, 37, was booked on suspicion of:

Royce’s first name was listed in some cases as Trever and in others as Trevor. All have been corrected to Trever here.

The hit-and-run injury accident was reported at about 8 p.m. Saturday, March 23. Police responded to the scene, at 877 E St. George Blvd., the probable cause statement says.

“A witness observed a black Ford truck go over a curb and hit a pedestrian who was located on the sidewalk,” the statement says. “The witness stated the truck left the State Liquor store prior to the accident. The witness followed the vehicle and gave St. George Police Dispatch a license plate number.”

The license plate and truck were registered to Royce, the statement said. Police contacted Royce by phone, and met him where he was, at the Tru Hotel, 1251 S. Sunland Drive.

Royce was asked to participate in a field sobriety test.

“Based on Trever’s performance in each test, I determined Trever was too impaired to operate a motor vehicle safely which contributed the hit and run accident,” the probable cause statement says.

“After field sobriety, I determined Trever was going to be arrested. I asked him if he would participate in a portable breath test. Based on the result of that test it was confirmed the presence of alcohol in Trever’s body.”

During the interview, Royce initially denied hitting anything with his truck, the statement says. Later, he said that after he left the liquor store, “he felt ‘a bump’ but did not observe the damage until he arrived at the hotel. Trever stated he removed a branch from his front bumper…. Trever stated he was unaware his vehicle hit a curb causing him to go onto the sidewalk where his vehicle hit a tree and a pedestrian.”

The probable cause statement said that evidence found at the scene included “tire marks on the sidewalk matching the same tire tread for the tires on his (Royce’s) Ford. The debris found on Trever’s truck matches the tree that was hit along with the pedestrian.” 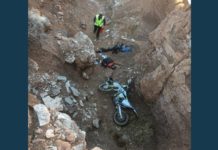 Teen hiker missing in Washington County has been found