CLEARFIELD, Utah, July 21, 2022 (Gephardt Daily) — A suspect wanted after a fatal hit and run last year in Clearfield has been apprehended in California.

“Jesse was staying with an acquaintance in northern Utah at the time of the fatal accident,” says a statement issued by the Clearfield Police Department. “Jesse has additional charges in California, and will be extradited to Utah at the conclusion of the California criminal proceedings.”

In Utah, the statement says, Duran will face preliminary charges of:

The Utah hit and run accident took place on June 9 of last year, and killed Robert Gormley, 67, of Ogden.

Detectives were able to identify the make and model of the suspect vehicle, and determine the name of the owner, who had by then left the state. An arrest warrant was issued, and for the past several months, detectives were in contact with California law enforcement officials. Duran was taken into custody Tuesday by the United States Marshal Pacific Southwest Fugitive Task Force, South Bay Team.

He also extended his condolences to the family of victim Robert Gormley, saying “we hope this provides closure and justice.”

In July of last year, Cody Axel Robinson, 29, of Brigham City, was charged with obstruction of justice, a third-degree felony. Robertson’s probable cause statement says he allowed Duran to store the accident-damaged vehicle in a relative’s garage until it could be repaired.

GPS records also show that Duran and Robinson were both in the area of the accident at the time it occurred. 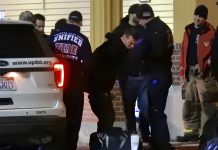