STOCKTON, Utah, April 18, 2021 (Gephardt Daily) — Tooele County Sheriff’s officials are reporting two dead in what is believed to be a murder-suicide, officials tweeted on Sunday afternoon.

They were alerted to the first fatality at 11:32 p.m. Saturday when a woman called the Tooele County Dispatch, the statement says.

“The caller disconnected and no further contact could be made with the woman.”

Deputies responded to 2481 Cedarline Loop, the residence associated with the phone number, the statement says.

“Deputies found two adults that are husband and wife deceased. Early indications are that the woman shot her husband before taking her own life.”

The investigation is ongoing and there is no threat to the public, the statement says, adding that names have been withheld pending notification of family. 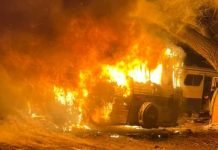