TOOELE, Utah, May 5, 2016 (Gephardt Daily) — Police in Tooele are looking for an armed suspect who reportedly fired a shot from his car at a man he had argued with who was standing outside a 7-Eleven.

A man who was alone and a man who was with a woman reportedly argued in the parking lot of the convenience store. As the couple left in their white Pontiac, the male, identified as 38-year-old Vernal Wright of Tooele, pulled out a handgun.

Wright reportedly fired a single shot at the 32-year-old man who remained in the parking lot.

The victim was not struck by the bullet.

Wright is described as a white male, approximately 5-feet-9-inches tall and 240 pounds. He has tattoos covering his hands, arms, head and neck. His head is shaved and has a goatee.

Police are trying to locate Wright, and are asking the public to contact them at 435-882-5600 if they know his whereabouts. Wright is considered armed and dangerous and should not be approached. 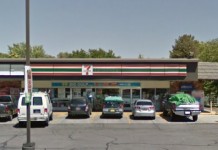