TAYLORSVILLE, Utah, May 22, 2020 (Gephardt Daily) — The Unified Police Department is looking for a man who reportedly stole a truck Thursday morning and injured the truck’s owner when the owner attempted to stop him from driving away.

UPD Sgt. Melody Gray said the incident happened at about 11 a.m. after the owner and his wife got home from the store and were taking their groceries inside.

The 2012 GMC Sierra Denali was parked in the driveway of the home, near 5400 South and 2700 West, with the doors open and the key still in the ignition.

As the couple came back outside, they saw that a man had gotten into the truck and was about to drive it away.

That’s when the owner got behind the truck in an effort to prevent the man from leaving. As the vehicle swerved to get out of the driveway, it struck the owner, Gray said..

The suspect then drove down the street, stopped briefly to pick up a woman who was waiting for him, and made his getaway.

The owner’s son, Kevin Wayman, posted about the incident on Facebook and included a photo of a man and woman who are believed to be the suspects in the case.

Wayman said his father ended up in the hospital with major injuries as a result of being hit by the truck.

Anyone who recognizes the man and woman in the surveillance photo or who sees the white 2012 GMC Sierra Denali with license plate number Y785NT, is asked to call Unified Police at 801-743-7000. 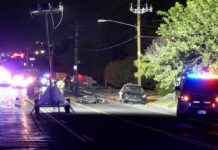