A Utah Department of Public Safety helicopter assisted in the Wednesday afternoon drama, along with an AirMed chopper from the University of Utah, DPS spokesman Sgt. Cameron Roden said.

Sheriff’s deputies, EMTs and members of the county’s search and rescue team responded to the call-out for the injured hiker at Notch Peak, according to a Millard County Sheriff‘s Office post Friday on its Facebook page.

“They were able to employ the amazing resources of an AirMed helicopter and the helicopter from the Department of Public Safety,” it reads.

“AirMed was able to drop a flight nurse near the patient to begin administering medical aid, then the DPS helicopter was able to use a hoist to bring in additional help, and eventually lift the patient out to the waiting EMTs and search and rescue.”

Roden said the DPS chopper was on scene for several hours.

No detail was immediately available on the hiker’s condition, but the sheriff’s post was effusive about the rescue effort, saying it served to “highlight what an amazing resource our search and rescue (members) are. They are volunteers who dedicate their time and talents in uncompensated service to our citizens.

“They show time and time again how fortunate we are to have such amazing partnerships with our communities and when we work together, it is our county that grows greater. Thank you to all who rendered their services!” 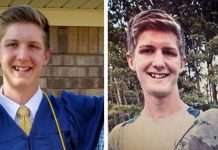