WEST VALLEY CITY, Utah, March 17, 2018 (Gephardt Daily) — Police have released the name of a man who was arrested Friday night after allegedly trying to strangle his girlfriend and then crashing a stolen car into three other vehicles, including a police car.

Niko Austin Martinez, 23, was taken into custody and booked into the Salt Lake County Jail.

West Valley City Police Lt. Steve Burke said officers were dispatched at about 8:15 p.m. on a report of an armed domestic situation involving a live-in boyfriend and girlfriend.

According to a probable cause statement, Martinez “placed the victim in a chokehold causing difficulty breathing. Ap (arrested person) forcibly ripped the vehicle’s car keys from the victim and took off in the vehicle.”

The vehicle doesn’t belong to Martinez.

During the altercation between Martinez and his girlfriend, Martinez’s brother used a Taser to stop the assault on the girlfriend, Burke said.

When officers arrived at the house, Martinez was in the car some distance down the street and could see them standing outside.

That’s when “the AP called the victim and stated that if he goes out so will the Victim and the AP’s brother. The Victims 12 YO daughter was in the house during this case and heard everything,” the probable cause statement says.

Other officers found Martinez on the move near 3100 South, just east of 2700 West, and attempted a traffic stop, at which point he fled.

According to the statement, Martinez was on the phone with the victim and told her he was “smoking a bowl” while driving.

He then ran a red light and crashed into two other cars at the corner of 3500 South and 2700 West.

“An officer with traffic lights working attempted to box in the AP. The Ap rammed the Police vehicle in attempts to get away,” the statement says.

The WVCPD officer driving the vehicle that got hit suffered a hand injury, and Martinez had a minor injury to his foot. The drivers of the other vehicles were not injured.

In the car with Martinez, police found 72.5 grams of marijuana, 2.9 grams of methamphetamine, two glass pipes used to smoke drugs, and packaging materials, according to the statement.

Police took Martinez into custody and then to a hospital to be evaluated, Lt. Burke said shortly after the incident.

Martinez now faces multiple felony charges, including robbery, aggravated assault, domestic violence in the presence of a child, and possession of a controlled substance with intent to distribute.

He also is charged with misdemeanors for threatening violence, DUI, failure to stop at the command of police, and not having a valid driver license. 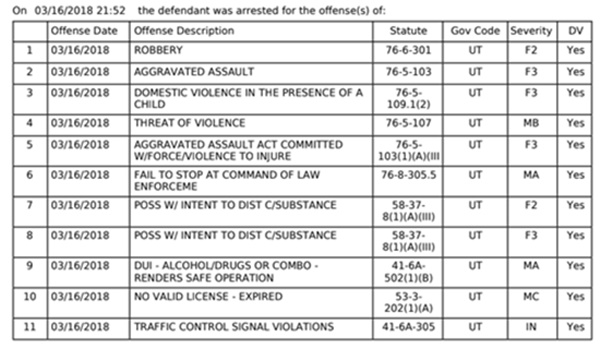