A 24-year-old woman was transported by AirMed medical helicopter to the University of Utah Hospital in critical condition, said Assistant Chief Bill Robertson with Bluffdale City Police Department. She was conscious when she was transported, Robertson said.

He said a few minutes before 4 p.m., officials received several 911 calls about the crash.

“Initially what we’re thinking happened is we have a vehicle turning off Aspen Avenue, or 14800 South, to go north on Redwood Road, and we think he pulled in front of the white pickup truck, that was going southbound,” Robertson said. “They made contact, and that sent the white pickup truck into northbound traffic at which time the white truck struck the Ford Explorer that was northbound, kind of like a head-on collision.”

The white pickup truck then ended up on top of the Explorer, he said, pinning the 24-year-old female who officials heard is five months pregnant. It took fire crews approximately 45 minutes to cut her from the vehicle.

The other two drivers and the three occupants of the van have minor or no injuries, Robertson said.

A tweet from the Utah Department of Transportation at 4:25 p.m. said drivers are being urged to find an alternate route as both directions of Redwood Road are closed. Drivers are being diverted onto 2200 West. The road is likely to be closed until at least 7 p.m. while investigators complete their work. 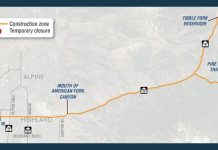 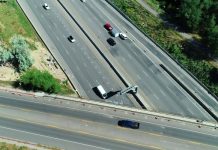