WEST VALLEY CITY, Utah, Jan. 14, 2021 (Gephardt Daily) — A woman has been arrested after allegedly shoplifting more than $20,000 in merchandise from Utah Costco stores.

A probable cause statement from the 3rd District Court of Salt Lake County said Andria Lecor Welte, 40, is facing charges of:

On Jan. 10, police were called to the Costco at 3747 S. 2700 West in West Valley City to take a shoplifting report where a female suspect was observed entering into the store, selecting over $5,000 worth of merchandise and leaving the store, the statement said. The act was also recorded via CCTV.

Police on scene were also alerted that the same woman had visited the same Costco on Jan. 4 and she had stolen over $4,000 worth of merchandise. The initial officer sent out a photograph of the suspect department-wide to attempt to identify the woman.

On Wednesday, detectives went to the West Valley City Costco to follow up on the case. Loss prevention was able to identify with their peers that the same suspect had shoplifted from the Salt Lake City Costco in December, the Murray Costco in the last week, and the Sandy Costco Wednesday. Detectives attempted to identify the suspect, but were unable to.

At 8:30 p.m. Wednesday, West Valley City Costco loss prevention observed the same suspect enter into the store and select around $4,300 worth of merchandise before loss prevention confronted her, the statement said. The suspect left the store, but was located and placed under arrest by police on scene. When searched incident to arrest, methamphetamine, marijuana, and drug paraphernalia were located on the suspect.

After being read her Miranda rights, the suspect, identified as Welte, said the methamphetamine on her person was given to her in exchange for the stolen products. Further investigation revealed that the suspect and her husband were staying in a hotel in West Valley City. The suspect was transported to the Home2 hotel near Parkway Boulevard and Bangerter Highway.

At the hotel, the suspect signed a consent to search her hotel room. The suspect’s husband was located inside of the room asleep and he was detained without incident. A search of the room revealed drug paraphernalia and several items indicated as stolen by Costco loss prevention. A pair of glasses that the suspect was photographed wearing during one of the shoplifting incidents in West Valley City was also located.

“The suspect confessed to committing all of the shoplifting to total over $20,000 and that she would exchange the merchandise for drugs,” the statement said.

The suspect’s husband in on probation; while Welte, before this incident, had six outstanding third-degree felony theft warrants.

Welte was transported to Salt Lake County Jail, where she is being held without bail. 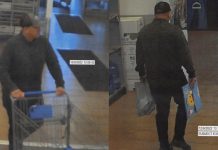