SALT LAKE CITY, Utah, Feb. 17, 2021 (Gephardt Daily) — A woman died Wednesday afternoon when the SUV she was driving flipped over twice, and the momentum carried her out of the vehicle’s sunroof, over an interstate barrier and to the ground below.

The woman, whose name and age have not been released, was driving a male passenger, and they had two children in car seats in the back seat, Lt. Nick Street told Gephardt Daily.

The woman had been traveling north on Interstate 15 and had tried to merge right to get to a ramp that would take her to westbound Interstate 80, Street said.

The SUV flipped, rotating twice, and the woman — who may or may not have been restrained — hit the sun roof and flew from the vehicle.

Sunroofs can be a vulnerable point in a car’s structure, Street said, and can open when a car frame is under extreme pressure.

After the victim flew from the car, she went over a cement barrier, and fell the distance — approximately 20 feet — to ground level.

Street said the woman had a weak pulse when first responders arrived, but she died soon after, at the scene.

The man in the passenger seat and the children in car seats were checked out at the scene, and did not appear to have suffered serious injuries. They were transported to a hospital to be fully screened for injuries, Street said.

The accident investigation is ongoing. Gephardt Daily will have more information as it is released.

Man hit, killed by car in Ogden while walking with bicycle 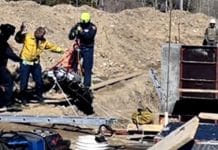