TAYLORSVILLE, Utah, Oct. 30, 2021 (Gephardt Daily) — A woman wanted on felony warrants is in custody Friday night after fleeing from Taylorsville police in a stolen car and crashing into several other vehicles, including a couple of police cruisers.

Sgt. Hill, with the Taylorsville Police Department, told Gephardt Daily the chain of events started at about 7 p.m., when a detective spotted the car that had been stolen out of Farmington.

“A female got into the car,” Sgt. Hill said, “and when officers tried to make contact with her, she backed into a civilian’s car and two police cars, disabling one.”

Hill said the woman then fled east on 3500 South and ran the light at 1300 West, where she crashed into another civilian’s car. The impact forced the stolen vehicle into three other vehicles.

“She abandoned the car and ran up to a civilian, and attempted to steal their vehicle, but officers arrived in time to prevent that,” Hill said.

Crystal Campbell, 33, was arrested and booked into jail Friday night. She is facing multiple charges, including robbery, felony theft, and fleeing, in addition to other felony charges.

Sgt. Hill said civilians whose vehicles were struck had only minor injuries. The officers whose cruisers were backed into were uninjured. 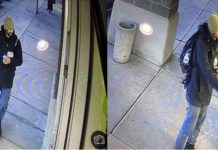 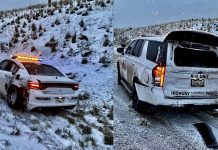 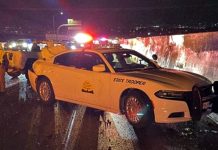 Video: Utah Highway Patrol vehicle rear-ended after troopers respond to crashes on I-215