Utah County Sheriff’s Office Search and Rescue and Salem Ambilance are responding to a call where a woman was seriously injured after her horse fell and rolled over her. Utah DPS and LifeFlight helicopters are also responding.

Utah County Sheriff’s spokesman Sgt. Spencer Cannon said in a video posted at 11:41 a.m. that crews are attempting to reach the woman with medical supplies. She had been riding with her husband when her horse slipped on the steep incline and rolled, causing her critical injuries.

Life Flight was searching for a place to land so the woman could be transported to a hospital after she could be stabilized, Cannon said in the video.

“Operations like this can typically take several hours,” Cannon said from the scene. “We’re certainly hoping we are able to get this taken care of much sooner than that, but the reality is when you have terrain that is so difficult to negotiate like this, and where the woman is and where the deputy and search and rescue team member and the Salem Ambulance crew are is extremely steep.

“And the husband, when he called in to 911 told the dispatchers that if he moves his wife at all, that she slides down a little bit more, that’s how steep it is. It’s a rocky slope, so they want to get her stabilized the best they can.”

Cannon seemed to be happily surprised when the rescue effort took much less time than predicted. He posted an updated video at about 12:10 p.m., showing the Life Flight helicopter preparing to take off with the patient loaded inside, then rising into the sky.

Cannon said in the second video that the woman was communicating, which was a good sign that she could recover, although it was no guarantee.

Cannon also said the horse was not found on the scene, so it was hoped it was making its way home. See his update video below.

Gephardt Daily will have more information on this breaking story as details become available.

DPS prepping for a hoist. 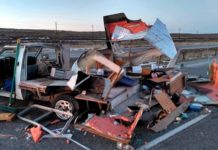 Driver, dog escape injury in rollover crash on I-80 in Summit County