Nov. 14 (UPI) — A 9-year-old boy who was injured earlier this month when a crowd surged during the Astroworld Music Festival has died, lifting the death toll for the event to 10, officials said.

“Our city tonight prays for his mom, dad, grandparents, other family members and classmates at this time. They will need all of our support in the months and years to come,” he said. “May God give them strength.

Blount died after he was placed in a medically induced coma and on life support after he sustained brain, liver and kidney trauma on Nov. 5 when a crowd surged toward the stage when hometown musician Travis Scott began his set at the two-day Houston music festival.

More than 300 people were injured and eight people were initially killed. On Wednesday, it was announced that Bharti Shahani, a 22-year-old Texas A&M University student, became the festival’s ninth fatality.

On a Go Fund Me page for Ezra Blount, his father, Treston Blount, said Ezra was on his shoulders when the surge began, causing him to pass out.

When he awoke, Ezra was gone, he said.

His son sustained “severe injuries,” including brain damage and “trauma to nearly all organs,” he said.

Ben Crump, a prominent civil rights attorney and personal injury lawyer, last week filed a lawsuit on behalf of Treston Blount against the festival, alleging negligence over crowd control and failure to provide proper medical attention, among several other charges, including failing to stop Scott’s performance until more than 40 minutes after city officials had declared it a mass casualty event.

“This should not have been the outcome of taking their son to a concert, what should have been a joyful celebration,” Crump said in a statement with co-counsel Paul Grinke, Alex Hilliard and Bob Hilliard. “Ezra’s death is absolutely heartbreaking. We are committed to seeking answers and justice for the Blount family. But tonight, we stand in solidarity with the family, in grief, and in prayer.”

Crump on Friday also announced he is representing more than 200 people who were injured at the festival. 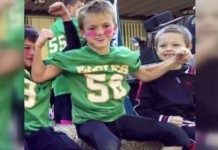