April 2 (UPI) — While submerged in a scandal over being paid hundreds of thousands of dollars by the University of Maryland Medical System for her children’s books, Baltimore’s Democratic Mayor Catherine E. Pugh said Monday she would be taking an “indefinite leave of absence” due to her deteriorating health.

The mayor’s office issued a statement saying Pugh, who was elected mayor in 2016, has been “battling pneumonia for the past few weeks” and the leave was advised by her physicians.

“At this time, with the Mayor’s health deteriorating, she feels as though she is unable to fulfill her obligations as Mayor of Baltimore City,” the statement said. “To that end, Mayor Pugh will be taking an indefinite leave of absence to recuperate from this serious illness.”

The announcement of her leave comes on the same day Republican Gov. Larry Hogan formally requested that state prosecutors investigate allegations that the University of Maryland Medical System unfairly bought thousands of copies of her book while she was a member of its board.

“These are deeply disturbing allegations,” Hogan said in the letter addressed to state prosecutor Emmet Davitt. “I am particularly concerned about the UMMS sale because it has significant continuing ties with the state and receives very substantial public funding.”

The medical system paid Pugh $500,000 in five transactions between 2012 and 2018 for 20,000 copies of her self-published “Healthy Holly” book series, The Baltimore Sun reported.

She also earned more than $100,000 for selling copies of her books to Health provider Kaiser Permanente while it was pursuing a contract with the city.

“All Marylanders have an expectation that their public officials as well as individuals involved with institutions that are funded by and closely related to the state, will follow the highest legal and ethical standards,” Hogan said in his letter. “I understand and expect that you will fully investigate the matters that have been reported and that you will take all appropriate legal action [if wrongdoing is uncovered].”

Pugh, 69, has claimed there was nothing improper about the sale of her books to the university’s medical system, but following criticism of the deal she resigned as a volunteer board member on March 18.

Then on March 28, she apologized for the deal, saying it was a “regrettable mistake,” The Washington Post reported.

“I sincerely want to say that I apologize that I have done something to upset the people of Baltimore,” Pugh said during the media conference. “I never intended to do anything that could not stand up to scrutiny.”

Monday’s statement from the mayor’s office said Council President Bernard C. “Jack” Young will be taking over her responsibilities as mayor.

Young, in a statement of his own, said he was “utterly heartbroken” by the developments of the past few weeks.

He said he prays for her recovery.

“Lastly, I understand how traumatizing this has all been for the people of Baltimore,” he said. “I take my responsibilities seriously and look forward to serving as a stabilizing force.” 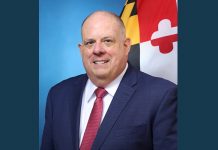