Oct. 15 (UPI) — A federal grand jury indicted a U.S. Capitol Police officer for allegations of working from the inside to protect a person who was charged with illegally entering the Capitol during the Jan. 6 attack.

Officer Michael Angelo Riley, a 25-year member of the force, is accused of telling the person to delete social media posts from that day.

Riley was charged with two counts of obstruction in the case.

“[I’]m a capitol police officer who agrees with your political stance,” Riley allegedly said on Facebook to the person before removing his own message later, according to NBC News. “Take down the part about being in the building they are correctly investigating and everyone who was in the building is going to be charged. Just looking out.”

Capitol Police said Riley has been placed on administrative leave pending the completion of this case. Riley, who was in the K-9 unit on Jan. 6, was not on duty at the time of the attack but did respond to reports of an explosive device on Capitol Hill that day.

The indictment said even after the person’s arrest on Jan. 19, Riley continued his contact with the person. 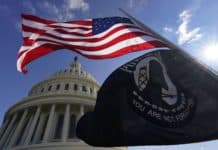