Feb. 22 (UPI) — Iran confirmed five deaths from the coronavirus Saturday, the highest death toll outside of China where the figure has reached 2,345.

World Health Organization Director-General Tedros Adhanom Ghebreyesus said the organization was “especially concerned about the increase in cases in the Islamic Republic of Iran.”

Iran confirmed 28 cases of COVID-19 infection despite the country insisting as recently as Tuesday that it had no cases. By Wednesday, Iran said it had five cases in people with a history of travel to China and two deaths. By Friday, four deaths were confirmed in Iran from the outbreak.

Furthermore, a case in Lebanon appeared to be linked to Iran, along with a new case in Canada.

Iran was the first in the Middle East to declare deaths related to the virus.

Kianush Jahnpur, a health ministry spokesperson, wrote in a tweet that at least two cases were in Qom, 80 miles south of the capital of Tehran. Officials also confirmed coronavirus cases in Tehran and the northern city of Rasht.

Meanwhile, the number of infections in China rose above 76,000 Saturday with a dozen infections confirmed at a single nursing home in Wuhan. The nursing home, Wuhan Social Welfare Institute, said 11 residents and one employee had the virus, according to a notice from the municipal civil affairs bureau in Wuhan.

Other Stories of Interest:  Just 1 in 4 remote workers wants to return to office, survey shows

The notice said one of the residents died.

Elderly people are particularly vulnerable to the virus with many reported deaths occurring in people 60 and older. Nursing homes usually house residents in close quarters, which facilitates the rapid spread of the virus, The New York Times reported.

In the United States, the number of cases rose to 34 with more cases expected.

In South Korea, 229 new cases were reported Saturday, bringing the total number of cases to 433, with more than half among a secretive religious sect, their family members or others linked to them.

Officials were trying to track down 700 members of the sect, the Shincheonji Church of Jesus, to be screened. More than 1,250 sect members have reported potential symptoms.

The Korean smartphone maker Samsung has shut down a factory after a worker tested positive for the virus.

Samsung said the factory was expected to resume operations Monday, but the floor where the patient worked will be closed until Tuesday morning.

In Italy, the number of sickened rose to 17 and the country has ordered mandatory quarantine measures.

“The cases that we see in the rest of the world, although numbers are small, but not linked to Wuhan or China, it’s very worrisome,” Ghebreyesus said Friday. “Those dots are actually very concerning.” 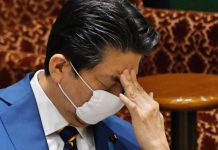