Nov. 8 (UPI) — Lawsuits on behalf of dozens of people who attended the deadly Astroworld Festival in Houston poured into local courts Monday as rapper Travis Scott promised to pay for victims’ funerals.

Eight people died in the stampede Friday night, when scores of attendees rushed toward the stage where Scott was performing. In the crush, some people fell and were trampled to death, including two children, ages 14 and 16.

Authorities said they have begun an investigation.

One of the first lawsuits was filed in Harris County state court on behalf of 35-year-old Houston resident Manuel Souza, whose lawyers claimed he suffered “serious bodily injuries when the uncontrolled crowd at the concert knocked him to the ground and trampled him.”

The suit, which names Scott, concert promoter Scoremore LLC, Live Nation Entertainment and others as defendants, claims the deaths and injuries at NRG Park in Houston were “a horrible — yet predictable and preventable — tragedy.”

The suit accuses Scott and organizers of gross negligence for failing to properly plan and put on the concert in a safe manner, and noted that Scott has encouraged a “culture of violence” in social media posts and onstage at past concerts.

Souza’s injuries, they claimed, “were the inevitable and predictable result of defendants’ conscious disregard of the extreme risks of harm to concertgoers that had been escalating since hours earlier.

“Earlier in the day, concertgoers breached a security gate around the park, stampeded into the premises, and trampled over one another.”

At least 34 Astroworld Festival attendees have sued or announced plans to sue in Harris County, including 27 clients represented by attorneys Tony Buzbee and Sean Roberts, The Houston Chronicle reported.

Among the plaintiffs are the family of 21-year-old Axel Acosta, who died at the concert, Buzbee announced.

More than dozen of the victims had filed suit as of Monday, each alleging negligence on the part of the defendants and asking for more than $1 million each, according to Houston Public Media.

Scott, meanwhile, announced he will cover all funeral costs for the eight who died.

“Travis remains in active conversations with the city of Houston, law enforcement and local first responders to respectfully and appropriately connect with the individuals and families of those involved,” the rapper’s representatives said in a statement issued to CNN.

“These are the first of many steps Travis plans on taking as a part of his personal vow to assist those affected throughout their grieving and recovery process.”

Harris County Judge Lina Hildago called for an “objective, independent” investigation of the rap festival, which was attended by about 50,000 people.

The Houston Police Department is one of multiple law enforcement agencies investigating the deaths. They are expected to focus on the design of the security barriers at the show, among other issues.

Questions have been raised about whether there was adequate security at Friday’s performance, and if law enforcement should have shut down the show because of the crowd size.

“Our prayers remain with the families affected by this tragic event,” the Houston Police Department said in a tweet late Sunday.

“The investigation … remains very active and is in its early stages.”

Houston Mayor Sylvester Turner said there was more security at the festival than there was at Minute Maid Park this month when the Houston Astros played three games in the World Series.

Officials have said that there were about 50 security staffers at the festival, plus almost 100 armed private security officers and dozens from the Houston Police Department.

Scott has been criticized since Friday’s stampede for continuing on with his performance — even when it became clear that fans had been injured. The rapper has said that he wasn’t aware of the severity of the situation at the time, and didn’t learn of the deaths until well after the show ended.

Houston Police Chief Troy Finner said that immediately ending the concert was not a realistic option.

“You cannot just close when you got … over 50,000 individuals,” Finner said, according to The New York Times. “We have to worry about rioting, riots, when you have a group that’s that young.” 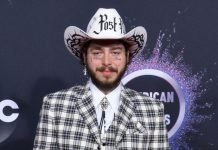